What is now called the Fibonacci Series was allegedly discovered C. 1200 AD by Leonardo Fibonacci,

It isn’t clear that Fibonacci understood the full import of his discovery or its relation to Phi or the Golden Mean.

There is a good deal of evidence that the ratio was known in ancient times. It has been said that the Pythagoreans considered he planet Venus and the pentagram as one and the same.

Venus, with her 13:8 orbital proportion to Earth, traces out a pentagram in the heavens over an 8-year period.

The numerical ratio is 1.61803398875. We find this expressed in the architecture of the pyramids of Egypt, the Parthenon in Athens, a multitude of Gothic cathedrals and many modern architectural works of art..It’s the ratio expressed in DNA

Take the nautilus shell for example. Each new segment has a 1.616033 ratio with the one preceding it.

We find it everywhere in some of the most famous works of art, particularly Classical or Renaissance. The Mona Lisa and many other works by Leonardo D’ Vinci demonstrates his familiarity and prolific use of the ratio.

Botticelli’s Venus is a virtual embodiment of the ratio, as is Michelangelo’s David.  The Venus pentagram was well know to adepts such as John Dee.

In fact, it is said that whatever expresses itself in this ratio is most pleasing to us.

The Golden Means also manifests abundantly in nature. Everything from sunflowers, fiddle heads and most flowering plants. The ratio recurs throughout the animal kingdom. Some of the best known are the the spiral shelled snails and the nautilus. The human ear has the same ration as do spiral galaxies. 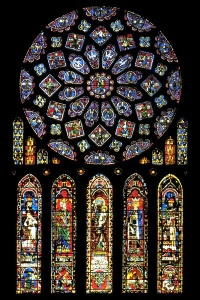 These all have the same ratio as recurring themes, one might say fractals.

It seems appropriate that Venus, the planet of beauty, harmony and attraction should express this ratio on a grand scale. We don’t know which came first: the recognition of beauty and harmony of Venus’ cycle or the attributes given to her.

It seems plausible that the two events were contemporary with each other. That would resonate with the fact that both have been known since ancient times.

In the process of the unfolding cycle, we have the spiral, the triangle and the circle. When her cycle is complete, she has formed a pentagram.

For something so powerful and so beautiful to be unknown to most of humanity is one more symptom of alienatation, not only from nature and the night sky, but from our ancestors. This 8 years cycle is, after all, in her relation to the Earth.

The Venus Cycle and Phi