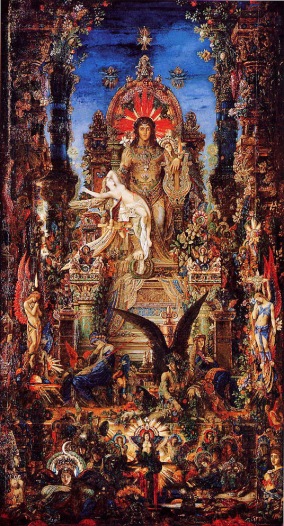 Jupiter and Semele – by Moreau

This is to discuss some of the etymological and ubiquitous symbolic qualities of the Sky God known by several names, but most famously as Zeus or Jupiter. He is perhaps best known as the Master of the Heavens.

He was identified by the Romans as Jupiter or Jove. Jupiter is known as the earth-shaker. At will, he could  summon rain, snow, hail, and all other meteorological phenomena.  He married his sister Hera.  Zeus was known for his countless love affairs. Neither chastity nor restraint are jovial attributes.

The son of Jupiter was Bacchus , synonymous with the Greek Dionysus. He shares some of his father’s traits, but in exaggerated form. He is typically depicted as the god of harvest, grapes, fertility and theater: other traits such as drunkenness, altered states including ecstasy makes him the opposite of Apollo.The “Apollonian and the Dionysian”  have been identified as archetypes in their own right.

Dionysus was very much his father’s son and was the subject of Mystery Cults, particularly in Greece.

Jupiter’s most feared and revered weapon was the lightning bolt, forged for him by the Cyclopes. Most cultures have a deity sharing enough similarities to associate it with Zeus.

Zeus’ name translates to “Bright Sky.” The letter zeta, is the Greek letter z for Zeus. Zeus is Jupiter’s namesake in Greek mythology. The same symbol represents tin, since it is one of the planetary metals in alchemy.   His Roman names are Jupiter and Jove. He is usually shown with his characteristic scepter and attendant eagles

I view the planets and luminaries as powerful archetypes, recognized cross culturally and for millenia. I prefer to think of these archetypes as Plato’s Forms.

This isn’t a modern idea as some misguided Traditional astrologers would say. It’s primordial.

Indra, the Hindu king of the gods, is always shown with a vajra (thunderbolt) held aloft in his right hand. He too is an Earth shaker and bringer of all kinds of meteorological phenomena.

Images of Jupiter and Zeus were employed to portray Christ, particularly in the Eastern Orthodox Church, but there are plenty of examples to be found throughout Christendom. Justin Martyr is said to have converted a man to Christianity by assuring him that the Christian God was just like Zeus ! Read Plato’s On the Soul’s Recollecting True Being and Beauty from The Phaedrus for a the Platonic and Neo-Platonic conception of Zeus.

Also read William Lilly’s Of the Planet Jupiter & his Signification. for the the Medieval Astrological Jupiter. 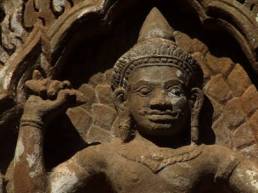 In astrology, Jupiter is a rich matrix of symbolism greater than the sum of its parts. He is power, excess, benevolence, jurisprudence. philosophy, joviality, exaggeration, generosity, and largesse. The thought of “the road of excess leads to the palace of wisdom” comes to mind ( William Blake – The Marriage of Heaven & Hell)

It is  becoming increasingly apparent that Europeans , Central and South Asians migrated from a common region in and around what used to be called Aryana.  The term Indo European can be taken more literally than it has been.

I stress this because our recovery and understanding of ancient astrology depends on having some deeper knowledge of anthropology as well as philology, history. philosophy and geography.