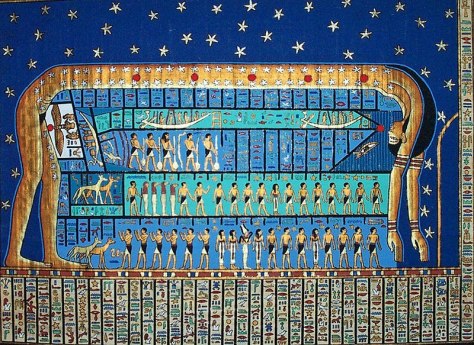 I have discussed the Hermetic Philosophy in a number of contexts. Here I want to get to the very core of the teaching because it is essential to Astrology as well as Sympathetic Magick. In such a medium it can only be an introductory article  – I hope it will inspire further research.

The image above is of the Goddess Nut. Her name is translated as ‘sky’ She is considered one of the most ancient deities in the Egyptian pantheon.

Her origin is found in the creation story of Heliopolis (city of the Sun). Originally Nut was goddess of the nighttime sky only. Eventually she was referred to simply as the sky goddess.

I have referred to the third century Alexandrian philosophy as essentially syncretic Neo Platonism and the Hermetic is very much part of the mix.

Her headdress was a hieroglyphic of part of her name which symbolizes the womb Female sky gods are not common.. Symbolically the Sky is the Mother — the divine origin.

The tractates of the Corpus Hermeticum, along with Asclepius, are the fundamental documents of the Hermetic tradition. It was written by unknown authors in Egypt towards the end of the third century C.E.

They were part of a once substantial body of writing attributed to Hermes Trismegistus, which means Thrice Great. They can ce seen as a Hellenistic fusion of the Greek god Hermes and the Egyptian god Thoth.

The Hermetica is thoroughly compatible with Platonism and neo Platonism in most cases and are often used side by side. For example, Plato’s doctrine of the Forms is congruent with the Egyptian belief that the Milky Way was the true Nile – more accurately the ideal Nile..

Under the Sub Lunary Sphere everything is subject to decay and corruption. The Hermetic Philosophy taught the way to liberation. We have a n inner light or *spark* of divinity that grows as we progress. But we can never be separated from the source

Plotinus used the image of a fountain of light to explain the soul’s descent into matter and invetible return to the source.

The Hermetica is a rich text, but at it’s core is what has become known as The Emerald Table of Hermes. This where we find the words :

If we turn to Astrology in particular, we can see how these precepts are the core of authentic astrological work. Marsilio Ficino referred to this  as “making your life agree with the Heavens (Book of Life p. 86).

The teaching of As above, So Below isn’t just a concept. It implies that the relationship between Heaven and Earth is very real. Plato would call this doctrine of essence that of the Forms.

When we discuss the Elements, Signs, Houses etc  in Astrology, we remember this formula

Astrology would be a futile endeavour if this were not true. The horoscope connects it’s native to the heavens, the source. It’s a strong recognition of interconnectedness with natural and the celestial world.