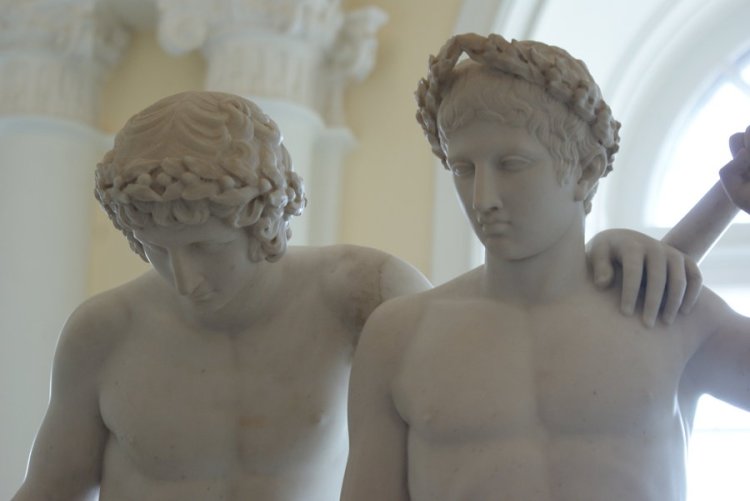 We are fortunate to have such access to many Classical texts on astrology In the  The Anthology of Vettius Valens of Antioch, Book I. Concerning the Nature of the Stars  (Schmidt & Robert Hand p. 3). Valens introduces Mercury with these words:

Hermes has two domiciles viz. Gemini and Virgo. Hermes is the most protean of all planets and is only masculine or feminine according to placement, that is to say Oriental or Occidental of the Sun. As the messenger of the gods you will find his glyph to be Solar and Lunar over the Cross of Matter; Mercury contains all three symbols, signifying the potential integration of spirit, soul and matter.

Hermes is the Primordial Hermaphrodite, adept at communicating with lightning speed. The price of speed however is lack of depth. This comes when he co joins other planets either by Aspect of Reception. It is important to note that Apollo is an ancient Greek name for Mercury as a morning star

“Gemini is male, bicorporeal, articulate, the house of Mercury, upward-trending, celestial, feminizing, a freedman, sterile, public. Under it are born scholars, those working in education and letters, poets, music-lovers, declaimers, stewards, those who receive trusts; also translators, merchants, judges of good and evil, sensible people, practicioners of the curious arts, and seekers after mystic lore.

In general, whatever the house ruler usually produces according to its own nature, whether good or bad, greater or lesser, this it produces in each of the signs according to the operative or inoperative configuration of the houseruler.”

I find this less satisfying than the description of Mercury itself.  It’s not that any of what he writes is false; but it has little meaning until the last sentence brings it all into focus. I dare say this is more true of Gemini than other signs, including Virgo.

Let’s turn now to the Gemini Myth. The tale of Castor and Polydeuces is complex. Other than the fact that they are called the twins (Gemini) it takes a bit of effort to find other elements of the myth that point to the sign.

They were the Dioscuri, twin sons of Zeus and Leda or Tydareus and Leda. When Tyndareus is called the father, Castor and Polydeuces — or Pollux, as he is known in Latin, are known as the Tyndaridae. Sometimes Castor is considered the son of Tyndareus and Polydeuces the son of Zeus, just as the Dioscuri’s sister Clytemnestra is the daughter of Tyndareus, while their sister Helen of Troy is the daughter of Zeus. Only Polydeuces  was divine.

Gemini finds its place in the Air triplicity, as the mutable (or common) expression of that element. The Air triplicity is concerned with the Intellectual faculties and the world of Mind. The sign is hot and moist, masculine, human and barren.

Like the element Mercury, Gemini likes to run over the surface of things, without ever penetrating the surface. This can manifest as the joy of intellectual play. Gemini is a dual sign and needs focus in order to resolve the apparent dual natures of their being, as illustrated in the myth of Castor and Pollux. It is only apparent: this is not like the situation with Pisces where the two fish are bound together and swimming in different directions. Although one is an equestrian and the other a pugilist, the Gemini twins are inseparable and move as one .

When Castor was slain in battle, and Polydeuces, inconsolable for the loss of his brother, besought Zeus to be permitted to give his own life as a ransom for him. Zeus so far consented as to allow the two brothers to enjoy life alternately, passing one day under the earth and the next in the heavenly abodes. According to another form of the story, Zeus rewarded the brothers by placing them among the stars as Gemini the Twins. They received divine honours under the name of  Dioscuri. The key here is knowing what it is to be human and divine at the same time.  Hermes weds Earth to Heaven.

Using Alchemical language, Paracelsus tells us that “The world is as God created it. In the beginning, He made it into a body, which consists of four elements. He founded this primordial body on the trinity of Mercury, Sulphur and Salt. These are the three substances of which the complete body consists.” (Paracelsus Ed. Jacobi . Trans Guterman p. 14) Salt is Base Matter, Sulphur is omnipresent Spirit of life and Mercury brings about the divine fusion of opposites.

Hermes is given many attributes in Classical sources. One of the better known is the association with the West Wind or Zephyr, the subject of much artwork, including Botticelli’s  Birth of Venus.