This is the third part of a series on the Age of Aquarius I began about a year ago. It is advisable to read parts I & II before reading this one. My main purpose is to bring about a questioning of the assumptions and expectations of the Age of Aquarius. This is a discussion the astrological community needs to have. Almost all I see on the subject could be mostly summed up the song by The Fifth Dimension. I’m not sure if it’s fear, laziness or a complete lack of interest that has cause this rather poignant dearth of discourse.

Aquarius is represented by Ganymedes, the Phrygian boy who was carried off by an eagle to Mount Olympus to become the cup-bearer of Zeus. The contents of the cup are not for common humanity, but for the gods. The myth was a model for the Greek social custom of paiderastía, the socially acceptable erotic relationship between a man and a youth. The Latin form of the name was Catamitus (and also “Ganymedes”), from which the English word “catamite” derives. See AMHER (2000), catamite, p. 291 Granted, Greek Mythology is not for the squeamish, but we are after all referring to a rape.

The pre – eminence of the aerial predator is also of interest, although the symbol is closely associated with Rome, the Eagle was a prominent symbol of the Nazis. The number of peaks and valleys of the Aquarian glyph has not been entirely consistent. There is generally two or three peaks and valleys. The SS officer lapel insignia invites comparison.

In a recent conversation, my friend Al Mackenzie mentioned that it had “occurred to [him] once that if you were to uncross the arms of a swastika and lay them parallel you would have the glyph for Aquarius..” The association of the Aquarian Age with what I have called “velvet fascism” has come up numerous times and is in that respect in agreement with Robert Zoller on the subject 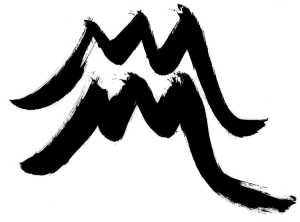 In the story of Ganymede the Water Bearer is a beautiful youth, abducted by Zeus in the form of an eagle for his own carnal pleasure. We can say that Ganymede was taken against his will to be the servant of the gods and of Zeus in particular. He serves as water bearers, but he also becomes the catomite of Zeus. The most salient of these facts are that Aquarius / Ganymede’ is by no means his own boss, Yet “New Age” sources will insist the ascent was to a higher state of consciousness ! I find this to be remarkably perverse.

The insistence that the Age of Aquarius must be an age of sweetness and light with technology in the best possible service of humanity is a position which is completely untenable, whether we examine the deeper meanings of the sign or simply observe how the last hundred years or so has manifested itself.  Again, I do not mention these things to dash all hopes 0r deride those who have sincere motives to seek justice and wisdom in an age where corporations increasingly affect the foreign and domestic policies of most of the world.  We should not be lulled into thinking that a new age will be the answer to all ills. It will depend on whose interests are addressed

Manilus relates that the “youthful Waterman, who from upturned pot pours forth his stream, likewise bestows skills which have affinity with himself: how to divine springs under the ground and conduct them above, to transform the flow of water so as to spray the very stars, to mock the sea with man-made shores at the bidding of luxury, to construct different types of artificial lakes and rivers,” and to support aloft for domestic use streams that come from afar. Beneath this sign there dwell a thousand crafts regulated by water. Why, water will even set in motion the face of heaven and the starry habitations, and will cause the skies to move in a novel rotation. ” (Astronomica, book 4, p.243.)

The nuances of mocking the “sea with man-made shores at the bidding of luxury” and ensuing lines could scarcely have been realized by Manilus. “Artificial” lakes and rivers already existed as reservoirs, aqueducts and irrigation during his time’ There is however the implication of technology gone awry or being used for very unnatural ends such as causing “the skies to move in a novel motion” I find an echo or Robert Zoller’s comments on the uses of technology in the Aquarian Age as being largely at the service of military interests and weapons that might very well include the manipulation of weather and even seismic events.  Environmental warfare is very much on the table in our New Age.

Returning to the emblematic Eagle, we are reminded of the ancient association of the Eagle with Scorpio. In Zoller’s schema, Scorpio has the nature of the overlords in the Aquarian Age. Aquarius is the servant or, as told in the mythology, a slave .Considering that the setting of Aquarius coincided with the inundation of the Nile in Leo seems like a mixed message to me. The necessary water arrives in abundance just, as it were, Aquarius retreats. The dryness of Saturn and the rigidity of Fixed Air, in opposition to the house of the Sun is an often puzzling mix. 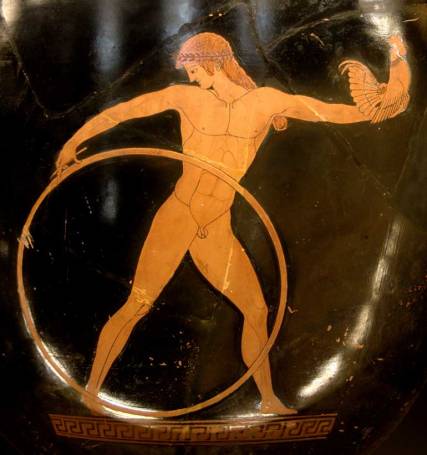 Ganymede rolling a hoop and bearing aloft a cockerel – a love gift from Zeus (in pursuit, on obverse of vase). Attic red-figure crater, 500-490 BC; Louvre, Paris)