My original intent was to write a lengthy article on the astronomical / astrological findings used in the ongoing project of decoding the 600 year old Voynich manuscript by Professor Baxter at the University of Bedfordshire.

That now seems somewhat redundant since Professor Baxter gives us two lectures of a little less than two hours and has posted the full 500 page article of his findings on his homepage. I’m therefore opting for an introduction and an opportunity to congratulate Baxter for his achievement. I would also encourage traditional astrologers and students of cultural astronomy to take an active interest in this project

Baxter is a linguist who has gone a long way towards cracking the code of this artifact which has remained largely unintelligible until recently . There has been extensive inter-disciplinary sharing of information on this project

In keeping with the focus of this site, the astrological elements that helped to decipher this manuscript are paramount. Baxter tell us that ““The manuscript has a lot of illustrations of stars and plants. I 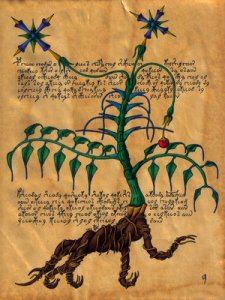 was able to identify some of these, with their names, by looking at mediaeval herbal manuscripts in Arabic and other languages, and I then made a start on a decoding, with some exciting results.”

He recognized Taurus, close to a picture of what could very well be the Pleiades, Pictures of known herbs were also useful. Baxter refers to seven ladies in water, but I’m inclined to think they represent the Pleiades themselves. However, this can be little more than an educated guess without seeing the context of the image to other images and text.

In the second video, Baxter discusses the Lunar Mansions, among other things as a calendar and seasonal indicator, This is in turn reveals the four elements and the humours.

He questions why Taurus would be where it is on the circle without mentioning the chart is an Octotopos, as is the image @ 11:08 in the first video. The Octotopos was a Hellenistic form using only eight houses. It is said that four mundane elements were divided by the four celestial points.

This would be supported by the fact that four of the houses are filled with stars. The other places four show lines connected to stars, each of the four houses contains a different number, from one to four as far as I can determine.

I make no claims to being an expert on that system. In the Octotopos, however, Taurus appears to be rising, depending on how it is viewed. Baxter ultimately refers back to the Lunar Mansions which divide the circle into 28 sections and puts weight on the position of Taurus indicated by the Mansion.

Again, we have more cultural context and linguistic information as the work of deciphering this fascinating artifact unfolds    Please refer to the previous article regarding Al Biruni and the Lunar Mansions for a deeper understanding. There are also pages on this site which discuss the Mansions directly.

14 thoughts on “Deciphering the Voynich Manuscript”