The Thema Mundi can strike one as a rather strange beast at first. Thema Mundi literally means “World Theme”, with ‘the word theme also meaning chart.  What we have is perhaps best described as a mythical horoscope, of particular interest to Hellenistic Astrology, showing the ideal position of the planets and luminaries. I use the term ‘ideal’ in the Platonic sense of the Forms.

The chart shows the supposed positions of the five visible planets and the two luminaries, the Sun and Moon, demonstrating the logic behind the rulership of signs, planetary exaltations and so on. It is regarded as the placement of all bodies at the time of Creation.  It is clearly not intended to correlate to an actual astronomical event. because Venus and Mercury are at impossible distances from the Sun. Venus is 60° from the Sun and Mercury is 30° Astronomically, the angular distance of Venus is never more than 47.8° and Mercury not more than 27.8° from the Sun.

All planets and luminaries are positioned in a sign they rule and at 15 degrees of the sign. Below we has the same Thema Mundi illustrating the ways in which a planet may aspect another : conjunction, opposition, trine, square and sextile. These are what have become known as the Ptolemaic aspects, but it’s clear that they long proceeded Ptolemy. It is estimated that the Thema came into being circa 322 B.C. One could very well write a book on this, but for the time being think of this as something of a universal key to Hellenistic astrology and beyond. 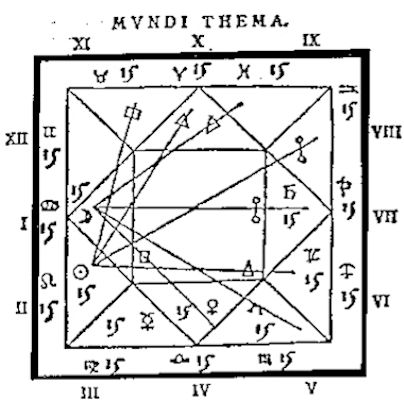 There is another term used to describe how signs or planets can relate. Ptolemy referred to it as an aversion, But strictly speaking it isn’t an aspect for the simple reason that it doesn’t aspect anything.  This is very important in Hellenistic Astrology because the Ascendant is as the life force and also what ‘steers’ the owner of the chart. The Sixth, Eight and Twelfth House are unfortunate houses because they are in aversion to the Ascendant. They cannot ‘see’ it.  It is not nearly as important with an aversion between signs, such as Aries and Virgo, but a matter of great concern between the Eighth House and the Ascendant.

If you believe that any of this has any credibility whatsoever, there is no getting around the fact that Aquarius is in the House of Death on the Axis of Hades. Once again, we can see that utopian views of the Aquarian Age are delusional. There isn’t ant other way to interpret this Thema with respect to the Eighth House.

I have stated elsewhere that I believe the Aquarian Age began in earnest at the beginning of the 20th Century, with sea power giving way to domination of the skies, including space. I have also raised the issue of what I’ve called “velvet fascism.’ This first century of the Aquarian Age and now the second is extremely destructive with 60 million killed in WWII and 40 million Chinese under Mao Zedong. alone Most strikingly the greatest conflicts were over secular ideology. The Communist Revolution in China promised a world of equality and plenty – a worker’s paradise. That sounds very Aquarian. 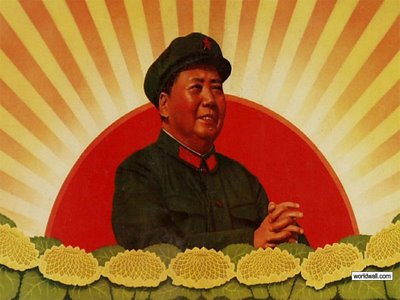 Once in power, Mao was so fixed in his ideology that he became a great tyrant, tens of millions of people starved, he set his mind on destroying anything traditional or old. Long before the Cultural Revolution, the bloody invasion of Tibet took place, with ensuing physical and cultural Genocide.

Mao famously told the Dalai Lama that religion is poison. But he has in effect formed a secular religion that was not to be questioned. As a plethora of images show us, he liked to be portrayed as a demi-god and the people were mostly acquiescent. Is it really a true revolution to replace an Emperor with a dictator? The Bolshevik Revolution promised similar benefits, but again we have a case of ideology that resulted in untold tragedies and death.

It is estimated that 100 million Russians died under Stalin ,What has made the wars and revolution so much more horrible if the rapid advancement of technologies with which Aquarius is commonly associated.  From mustard gas to atomic bombs, we have seen unprecedented destruction. None of this seems out of place with what we saw in the Thema Mundi and in previous articles on the Aquarian Age.

Indians think in much longer succession of Ages The length of Ages are not always consistent. Depending of which school of Hinduism you ask, there can be a massi9ve discrepancy. Some sources say  the Kali Yuga lasts for 432,00o years only 5,000 years of which have elapsed.  The Kali Yuga is considered the worst Age of all, yet the symbolism is not so out of place in our own age.  The imagery is comparable to Rubin’s painting of Saturn devouring his children.  Saturn, is, after all, a malefic. and the Eighth House is the place of death.

The Platonic system gives us much shorter ages, but even so, it would be very far from the truth to say that someone can’t do good things in difficult times. They always have. However, the Age of Aquarius has been consistently portrayed as a Golden Age when people will attune to higher frequencies and love each other, as nobody could have loved each other in any other age. The most insidious aspect of velvet fascism is that it promises freedom, while globalisation, a very Aquarian idea, makes slaves of some and consumers of others. As always, to have knowledge is to be forewarned..