It cannot be anything but auspicious to witness an emerald green comet  in the region of Orion at the New Year. It was detected by telescopes in August, but in astrology we deal with the visible in our science of light.  Comets or “hairy stars” have fascinated humanity since the dawn or time..

If you are in the Northern Hemisphere, It will be quite visible to the naked eye later in the month, but at present we have a waxing Gibbous Moon that will be Full on 04 January 2015. Objects require much less ambient light in order to be seen. To view it look towards the late South Eastern sky beneath the feet of Orion. It will appear to pass between Canopus and Sirius, the latter being the brightest star in the sky.

The reading of comets is an ancient method of divination, almost always used in tandem with other astrological elements. For the traditional reading of comets, I will be referring to Guido Bonatti’s On Mundane Astrology Trans Benjamin N. Dykes Cazimi P. 2010. From here on in I will refer to this as BMD.

Bonatti asks us to look at the direction of the comet. If it is moving towards and / or has its head in for Taurus, “it signifies the killing of wealthy and great men in the northern part, and it signifies a multitude of differences between the wealth and the magnates and the rustics of the western parts … it signifies the bad condition of men and a scarcity of their good, and injuries of rebels against those who are in those region; which if it will appear in the west will be slower” (BMD 979).

Countries ruled by ♉.– Persia, Great Poland, Asia Minor, the Archipelago, and the southern parts of Russia, the islands of Cyprus and Samos, and the port and vicinity of Navarino.

It’s not surprising that these countries and regions would be highlighted as there is a very high possibility of conflict, particularly with the deteriorating relationship between Russia, NATO and the US. In Mundane Astrology several elements are considered to give more precise information. In this case however, we do have some confirmation rather than a prediction in the ordinary sense of the word. Southern Russia, including Georgia, Chechnya and the Ukraine, perhaps. Asia Minor esp. Turkey is part of the picture and there are strategic troop build-ups in Cyprus. Iran has been the focus if Israel and the US for quite some time.

There are nine types of comets according to Ptolemy: the javelin, the tenaculum, the measuring0ros, a miles, the lord of ascona, the morning or dawn comet, the silver the rosy and the black “and he said the first four of these are likened to stars, And all signify wars and terrors and great events in the world” (BMD 986).

Ptolemy asks us to consider the colour of the comet, but his guidelines are far from complete. Green isn’t mentioned, but by association and process of illumination, I would suggest Venus – nevertheless her benevolence is all but lost when associated with a comet. Venus would also give us a further association with Taurus.

Historically, comets have rarely if ever been seen in a positive light as the image of the comet of 1527 below will attest:  both image and  written description personify the event . The comet’s “head like a bent arm, as if it had a sword in its hand and wanted to strike. And at the point of the sword there were three big stars and from the stars sprang a cloud-coloured stream, which was longer than the comet’s tail.” – The Book of Miracles I cannot help but wonder if the three stars are the belt of Orion 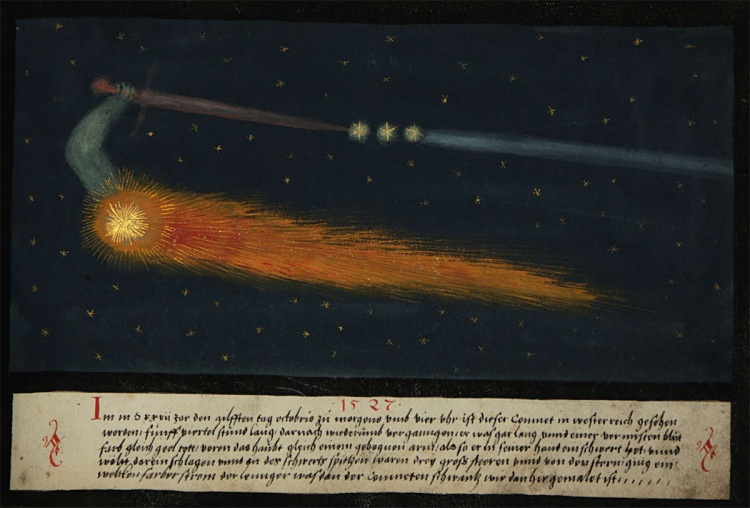 3 thoughts on “Passage of the Emerald Comet”