Most have heard of Brian Jones, if only as one of rock’s most unhinged, dissipated casualties who died in his own swimming pool as the result of an overdose at the age of 27. The fact that he had recently purchased the mansion that had previously belonged to A.A. Milne, the creator of Winnie the Pooh, made for a bizarre background of whimsy to a life of debauchery.

However, he was happier than he had been for some time. His untimely and in many ways implausible death has been examined in many ways, but the ultimate cause of his death is mysterious. He had not imbibed in heavy drugs and was a very strong swimmer. There was a great deal more to Jones than is commonly known  To a large extent this is intentional. He had many enemies.

It is surprisingly challenging to find an accurate, credible chart for Jones. Perhaps the most often referred to source for natal information has a chart with Virgo Ascending. I found a brief article elsewhere that used the Scorpio Ascending, although the original source was not given and the timing of 12.07 given without mentioning whether it is AM or PM. I find no reason to doubt this chart. The one with Virgo Ascending is frankly impossible.

Jones was the founder of the Rolling Stones and gave it their distinctive sound. Initially, the sound was an emulation of American blues musicians, all of them black and none appreciated much by whites in their own country. It has been claimed that Jones was the only real slide guitarist in England when the group was formed. He was a major player in the introduction of American Blues in England. 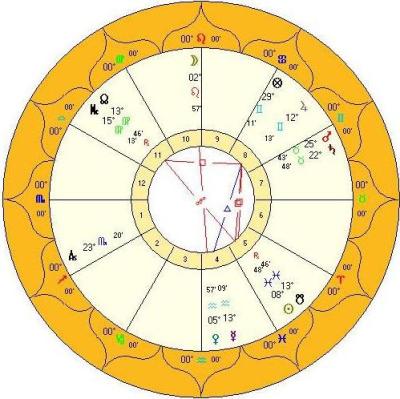 He was their articulate and charming spokesperson. He could play anything with strings, from guitars, lute, dulcimer, sitar, a variety of North African instruments, mostly from Morocco. He was an excellent keyboard player – from piano to harpsichord. He played a wide variety of ethnic instruments, including the marimba on “Under my Thumb.” However, he didn’t write any songs than anyone can remember and for such a famously flamboyant dresser, he could seem quite wooden alongside Mick Jagger and Keith Richards.

It is this confluence of flamboyance and alienation that I want to explore using Traditional Astrology. Usually, readings of anyone, and particularly the likes of rock stars, rely heavily on exotic interpretations of the outer planets which could just as easily apply to legions of people born in a broad time frame.  They do this very often at the expense of the original seven planets and luminaries.

We begin with Saturn as Almuten Figuris, This is the abiding spirit of the chart. The Moon is the Lady of the Nativity. She is free, Occidental and in halb. In the Tenth House she indicates, among other things, that Eminence manifests as a Lunar Leo. This is associated with flamboyancy,  vanity but also great sensitivity, The Moon in Leo by itself generally augers well for musical talent which Jones had in abundance, despite the fact that the Moon is Peregrine in Leo. This Leo 10th House is of course what the public sees most.  The Lord or Lady of the Nativity is like the ambassador or emissary so this Lunar – Solar Self was what was seen first and foremost by his *public,*

The combination of the Feminine Moon with the Masculine Sun brings a certain flare and an androgynous sensibility. Jones was an icon of the British Mod scene, pushing the limits of gender identification in fashion. Unsurprising, Anita Pallenberg, with whom he lived and loved with for two years, was herself a model. His father said she was the only woman he really loved and that he never really recovered when she defected to Keith Richards.

Further support for this Eminence is that the Lord of the Arabic Part for Kings and Sultans on Jone’s Nativity is also the Moon. So we have Moon on the angles, tenth house and free of malefics in a Nocturnal chart. The Moon is in an applying opposition to Venus and Mercury in Aquarius. The conjunction of the latter contribute to his musical abilities, This is given in rich abundance. Procyon on the MC, however, reminds us that there are great opportunities that are short lived.

Finally, we consider the Ascendant for more on Eminence. This is where the cracks begin to show. Eminence can only be attained and maintained if the Nativity as a whole can support it.  The Lord of the Ascendant is Mars in Taurus, in tight Opposition to the Ascendant. Saturn is in a 3° conjunction with Mars. So we have both malefics, in an angular house. Although Taurus is the Exaltation of the Moon, this does little to ameliorate the deleterious effects on the life force embodied by the Ascendant. The Lot of Jupiter is conjunct the Ascendant, but this wouldn’t be enough to change the prognosis to any great extent..

We can now look at the Sun in Pisces in the Fifth House. This is a strong indicator of a great artist, particular considering he is the Lord of the Tenth House and the Moon. There is a square between the Sun in the Fifth and Jupiter in the Eighth. This is quite deadly because Jupiter is the ruler of Pisces. The darker side of Jupiter is excess and in this case particularly excess inebriants, made all the more enticing because of the house placement and all the more deadly for the Eight House Jupiter. This could be interpreted as a *death wish* scenario. This ‘wish’ is all the more likely to be realized by the placement of the Nodes and their square to Jupiter. With the S. Node in the Fifth House we are given yet another indicator of the means to the end – entertainment, pleasure, sex and drugs will be the nemesis of the native.

Jone’s Temperament was strongly Choleric – highly driven and sometimes abrasive, a poor mix with his Jupiterean Sun — accentuating his Scorpio Ascendant. Alcohol ss very attractive to Choleric types. It would seem to be a cooling balance to the dry heat, but alcohol is known as fire water for good reason. It makes everything much worse in this case.

The obvious brilliance of Brian Jones was not supported by the Eleventh House, where we find the Lot of Saturn and Mars. In the end, he was kicked out of his own band after years of drug and alcohol abuse. But the difficulties began with his alienation. One wouldn’t expect someone with this chart to be what is now called a “team player” if that meant he had to play a subordinate role in the band he created. There was in fact some degree of paranoia, but this became a self perpetuating dynamic. The more he felt himself relegated to the side-lines, the more introverted he became. Beggar’s Banquet was the last album he played on as part of the band., but he is also on “You can’t always get what you want” and “Midnight Rambler” on Let it Bleed. You won’t find him in the credits.