This Total Lunar Eclipse on the Leo/Aquarius axis will be among the many wonders of the night sky this year that stargazers won’t want to miss. The view from Victoria, B.C. will be superb, if atmospheric conditions don’t interfere too much. The Total Lunar Eclipse will begin at 2:51 am, will peak at 5.29 am and end at 7.50 am.  The West Coast of North America, Asia, Australia, the Western side of Hawaii and elsewhere in the Eastern hemisphere, will also be positioned for excellent observation. For a graphic image of the areas of visibility, consult the map at the bottom of the page.

Image courtesy of NASA who will be offering live coverage @ https://twitter.com/NASA?ref_src=twsrc%5Egoogle%7Ctwcamp%5Eserp%7Ctwgr%5Eauthor

This is a Blue Moon and a Super Moon. A Blue Moon occurs when there are two Full Moons in a month. A Super Moon occurs when she is much closer than usual to the Earth. The Moon will turn red as she moves into Earth’s shadow and this phenomenon is known as a “Blood Moon.” The combination of the Blue Moon, Lunar Eclipse, and Super Moon makes this a rare sight.  The last time this triple event occurred was in 1982 and the next won’t occur until 2037. However, the last time all three occurred with a total lunar eclipse was reportedly in 1866. The next Blood Moon will occur on 19 January 2019. It will also be a Super Moon, but not a Blue Moon.

The Moon is in the Eleventh Lunar Mansion, named Al Zubrah (The Mane) This Mansion begins at 8°34’17″ Leo and ends at 21°25’40″ Leo. According to Ibn Arabi. this is “The First Heaven, the Sphere of Saturn, the Sky of the Visited House and Lotus of the Extreme Limit, the Abode of Ibrahim (Abraham).”(ca. 1200). Elias Ashmole tells us “When the Moon is in this Mansion, let out no prisoner. Besiege cities. Sow and plant what thou wilt. For merchandise and journeys, this Mansion is neutral. Lay foundations and build. Take fellowship and you shall win. Wear no new clothes. Shear your hair if you will.” 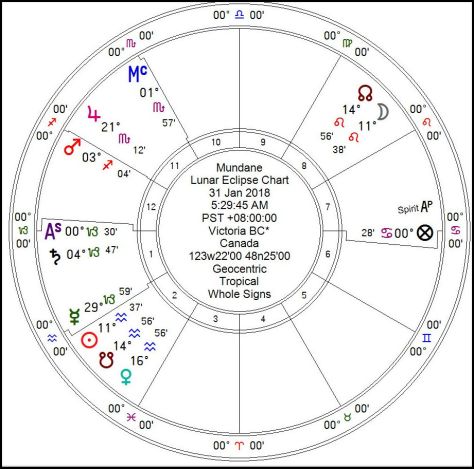 The astrological chart is calculated for the time of Maximum Eclipse when the Moon is closest to the center of the shadow, as seen from Victoria, B.C.

If your location permits, be sure to enjoy this rare event.  You will be able to view it with the naked eye, but binoculars or a simple telescope would enhance the experience. If you are not in the viewing range of the eclipse or there are problems with visibility, you could instead watch events via the NASA website I cited under the image of the Blood Moon.

U Naval Observatory showing the day and night sides of Earth at the instant of the greatest eclipse 2018 January 31 at 13.30 UTC