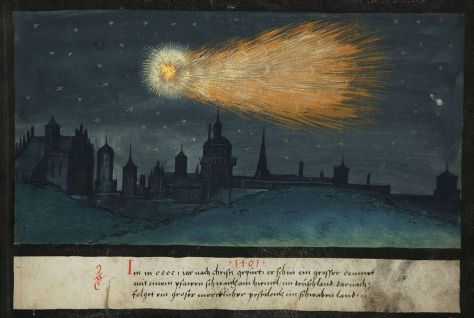 Augsburger Wunderzeichenbuch, Folio 52 (Comet mit einem grosen Schwantz, 1401) “In the year A.D. 1401, a large comet with a peacock tail appeared in the sky over Germany. This was followed by a most severe plague in Swabia.” — The Book of Miracles (f°74), ca 1552

You may consider this post as something like a page from a scrapbook on the artistic records of historical comets and other celestial phenomena.

The New Year in our current tradition begins with the first day of January which is named after Janus.  In Roman religion, the animistic spirit of doorways (januae) and archways (jani). Janus and the nymph Camasene were the parents of Tiberinus, whose death in or by the river Albula caused it to be renamed Tiber The symbol of a gateway or doorway is indeed apt. However, most commonly we associate Janus with the ability to see into the past and future. I believe that every new beginning deserves a glance at the past, to see how we got where we are. Animistic spirit doorways are what we pass through when we discover new ways to communicate our experiences and the authors and artists of The Augsburg Wunderzeichenbuch have done just that, The paintings do not attempt to provide a faithful rendering of a physical sighting. Instead, the comets are wildly expressive of their perceived nature.

The simple and miraculous truth is that we are literally made of stardust. The heavens have had a vital role to play in all known civilizations. The comets shown here did, in fact, coincide with earthly events.

Skywatching used to be a far more common practise, not least because the skies were clearly visible and without the modern levels of light pollution. In many cases, such as the examples given here from Whether we look to the past or the future we see signs that assist in prediction and make sense of extraordinary occurrences. Dramatic celestial events, even when feared as apocalyptic nevertheless elicited a sense of profound awe. The images of comets are magnificent, even if considered portents of doom. Some are from Biblical accounts imagined in reference to life in the 16th Century.

Courtesy of The Warburg Institute Library The School of Advanced Studies -University of London.  The book contains 167 colored representations of miraculous signs (portents) in the media of gouaches and watercolors  The work is attributed to Heinrich Vogtherr and Hans Burgkmair the Younger. 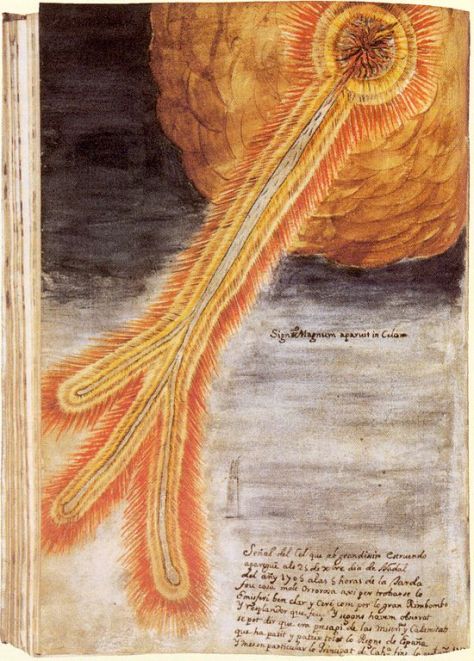 On Christmas day 1704 a great light appeared in the sky of Catalonia. It was a meteorite of a kilogram of a rocky type that crashed near Catalonia. It was collected in the Scientific Miscellany of Josep Bolló, who made the drawing, describing it as Signe Magnus,  “And as we have observed, it can be said that it was an omen for the miseries and calamities that has suffered and suffers all the Kingdom of Spain, and more particularly the Principality of Cathalunya.”