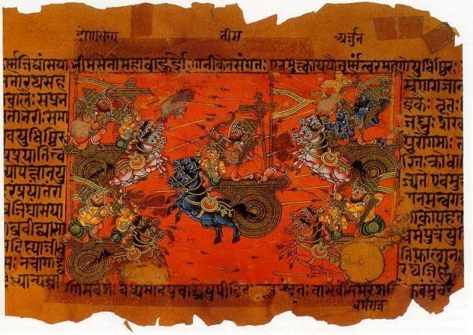 It has been my contention for a very long time, that if we were to somehow remove the Indian influence on astrology, we would have precious little left at the end of the day. Moreover, this source of wisdom goes back to the sages who composed the first of the Veda, know as the RgVeda. This would take us back perhaps 6,000 years and we can safely estimate that the oral wisdom predated even that by a considerable period of time. It is thought that Zarathustra was a Vedic priest, which would speak to the far reach of the Vedic cultures which extended also well into what is now Afghanistan.

The purpose of this article is to stimulate further research and increased dialogue with practitioners of ancient Indian astrology. However, it is merely an incomplete introduction and if it raises more questions than it answers, I shall be content with that. The title of this article is taken from Subhash Kak’s The Astronomical Code of the Ṛgveda (Third Edition)  2011 which has kindly been offered.to the public for personal use at no charge.

There are some splendid Western scholars Indian astrology, including such greats as Dr. David Frawley, James T.Braha, Hart Defouw, Robert Svoboda, Komilla Sutton, and others. At the same time, we can learn a great deal from Indian, Greek, Egyptian, Babylonian, Zoroastrian and another form of astrology as they exchanged knowledge in Alexandria. I have always seen this as a kind of alchemy wherein the end is much greater than its constituent elements. Many astrologers have found that Greek astrology, for example, seems to be missing pieces of the picture and this is complicated further by the fact that Greek astrologers didn’t provide anything like consensus to posterity.

Nevertheless, the number of Western practitioners who welcome what ancient Indian astrology may have to offer them is minuscule. I suspect that one of the chief reasons for this is a lack of knowledge regarding the background and we stall at the difficulties of transference. Most obviously, it is difficult to ask even a seasoned practitioner to adopt one of the Sidereal zodiacs. The requires one to accept different Signs for the same periods. Also, the philosophy, mythology and indeed mysticism of Rahu and Ketu and immeasurable more advanced and developed than any Traditional Western system. Again, one needs to go to the ancient sour es and attempt to understand a way of being that, according to scholars of ancient Indian astronomy, actually belongs in a different Yuga – one in which the gods lived on earth.

The astronomical accuracy of the ancient rishis is astounding. In the ‘Hidden Mysteries’, publication, Osho states::  The deepest laws of astrology were first discovered in India,” says Osho while speaking about the origins of astrology and the relationship between the sun and the human body” Ch 5, Part 1 of 6. Oshos’s assertion is impossible to deny. There is simply nothing that comes close to Ancient Indian Astrology in terms of sophistication and astronomical accuracy involving virtually unfathomable periods of time.. This implies that all other schools of astrology owe their beginnings to that tradition. Of course, the fact is, we know very little about who these rishis actually were and even less about how they attained their level of knowledge.

Pages from the Rigveda

As is the case in Persian astrology, there is sophisticated interrelatedness between the Creation stories and astrology. In my mind, the Classical pantheon as related to astrology seems rather thin and derivative.  Venus, for example, is a mere caricature of the goddesses of India, Persia and the Middle East. Writing on the Nodes in the Western tradition are mostly vague and never very useful. It’s painful to read William Lilly fumble over the meaning of the Nodes. It is entirely understandable that any reader that he isn’t quite sure what to do with them. Personally, I prefer to try things out for myself and I can say that no western writer has been as clear and profound as Indian ones with regard to that topic.

One can, however, take what one has learned and apply it in the spirit of its significance rather than. with recourse to dogma. Indian and particularly Hindu culture is one in which nobody is held to account for worshipping and thinking what they see as truth. India is unique in this respect and is always amenable to diversity.  Dr. David Frawley writes”India’s vibrant democracy and diversity of spiritual and religious practices is owing to its Hindu majority culture and the vast rishi and yogic values it is based upon.”  This quality ought to suggest relative ease in incorporating Indian wisdom into Western astrology. As mentioned above, there are in fact significant hurdles today, which would have been far less so in antiquity.

Nevertheless, it should be borne in mind that there was indeed a great deal of transference in antiquity:

“The Vedic system of knowledge, with an assumed linkage between astronomical and terrestrial events, implies a system of astrology as well. The planetary periods [sic] evidence from the Rgvedic code is at least a thousand years before such knowledge outside India. With these dates and the attested presence of the Vedic Indians in West Asia in early second millennium BCE, it becomes easy to see how the astronomical ideas of the ¯re altars and the Rgveda could have been transmitted to Babylonia and Greece.” (See Subhash Kak. The Astronomical Code of the Ṛgveda (Third Edition)  2011. In later times, there was a reverse influence, notably from the Greeks and Persians.

Most perplexing of all is internal material in the RigVeda and what it tells us of the ancient origin of the work:

That particular Vedic reference could not have been added at a later period. Other, younger generations would not have been able to work out a constellation that existed many years before. But now we have scientific methods which we can use to discover where the stars were at a particular moment in the distant past.” (Osho, Hidden Mysteries, Ch 5 (translated from Hindi), Part 1 of 6.)

To accept this, we would have to radically change our concept of history – yet this ancient constellation would have to be accounted for. What possible reason could there be for the writers of RigVeda to invent such an elaborate fiction? Conversely, If we accept the internal evidence, we would have to admit that our knowledge of the distant past is sadly lacking.

It may come as a surprise that the Rigveda there “were two kinds of year in use. In one, the year was measured from one winter solstice to another; in the other, it was measured from one vernal equinox to another. Obviously, these years were solar and related to the seasons (tropical).” (Kak p. 177).  Most westerners consider the Sidereal Zodiac to be of the essence in Indian astrology, but there is reason to believe that it was a later, perhaps foreign idea. The division of the year into 12 Signs and 27 Nakshatras or constellations is illustrated thus:

The 27 Nakshatras are roughly equivalent to the Lunar Mansions (28), except the Nakshatras are considered far more in modern Indian astrology and I suspect this goes back a very long way.

A Russian by the name of …. discovered that rishis were aware of an 11 years cycle in which the Sun produced a massive explosion. He realized that the cycle was immediately connected to human life. He got into trouble for suggesting that revolutions and other major upheavals mirrored a corresponding Solar disturbance. The point here is that the outer Universe was known to be inextricably connected to all forms of human life which is the most basic definition of ancient astrology.

Pythagoras traveled to India and  Egypt and was particularly impressed by spiritual practice and beliefs he found in India. From the record we have, which is by no means comprehensive, his theory of celestial correspondence appears to beat in part indebted to the essential knowledge he discovered there and that this provided the impetus to develop his own system.

It should be understood that this modest article does little more than point to the relevance of the Rigveda and Indian astrology. However, there are some things that the western astrologer can learn from Indian astrology and indeed the Vedas themselves. Most importantly is the spirit of ancient Indian astrology. It is immensely practical and deeply mystical. At this point in history, I am somewhat pessimistic about Indian and Western astrology can incorporate each other, but that is no small part due to the changes that have come to be in the unfolding of Indian astrology itself. The simple case of the sidereal and tropical zodiacs is one such barrier.

In a subsequent article, I will look more closely at how the rishis were able to achieve such extraordinary accuracy with respect to the length of the years, the yugas and planetary cycles. At least as interesting is why the felt they needed to map such massive periods of time.

One thought on “Astronomical Code of the Ṛgveda: I”