I usually start my readings on the Solstices and Equinoxes with a reminder that the charts are secondary to the occasion itself. It’s crucial to mark these times in a spirit of celebration. The Equinox marks the battle day for the Holly King and the Oak King.

Admittedly, Autumn is my favourite season. It is the point at which the days and nights are equal in the Northern Hemisphere, aptly beginning on the first day of Libra the Scales. It is a time when we and nature begin to turn inwards, the trees withdraw their sap , farmers harvest and animals store food for the cold winter to come.

On this particular occasion, this time of balance has an enormous amount of interest for the UK. I have there drawn up the chart for the ingress of autumn at Greenwich. The Ascendant, Venus, Mercury and Sun are in Libra in the 1st House. The Part of Fortune is in good relation to the Sun and so to the Ist house in general.  The third house has a strong Jupiter. 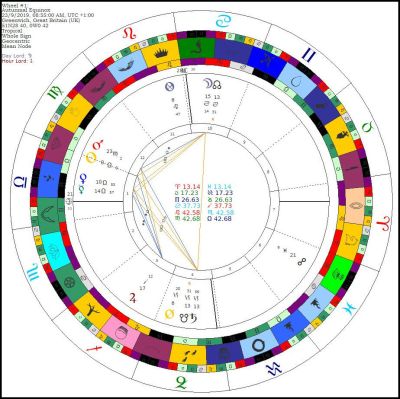 The drama and the mystery begin with Mars in Mercurial Virgo. holding out in the 12th house of hidden enemies. In this sign and context, it reminds one of paperwork or most interestingly a paper tiger,  Unlike the previous chart  we examined, the Moon is on the Midheaven and the 6th House is in Pisces and disposited by Jupiter in his own domicile

This chart bodes quite well for the people of London on the Autumnal Equinox. The possible sour note is Saturn in his own domicile with both the South Node and the Part of Spirit. The fourth house is the end of the matter in horary and first and foremost this is the place of deep ancestral connections, to the land and the people. Saturn here is highly competent and very aware of his responsibilities.

And all shall be well and
All manner of thing shall be well
When the tongues of flames are in-folded
Into the crowned knot of fire
And the fire and the rose are one.

One thought on “Autumnal Equinox”