It may seem early to be discussing an event that won’t occur for another year, but the fact is that all cycles and events are interconnected and the events preceding this Grand Conjunction provides substantial information regarding the event itself. I expect to have more to say on this momentous event as we get closer to the moment.

Great conjunctions occur regularly, approximately every 20 years, due to the combined effect of Jupiter’s approximately 12-year orbital period and Saturn’s approximately 30-year orbital period. These Comjunctions have been observed from the earliest times. and considered as portents of a new cycle in everything from political shifts to popular trends over the 20 year period over the upcoming Great Conjunction which will occur in Libra on 31 October 2040. looking back at the period we have experienced since 28 May 2000 in the Earth sign Taurus

The Great Conjunctions exert their influence most potently from one to the next, but it should be understood that it is a continuum, which was no doubt at least one of the reasons that Johannes Kepler mapped the relationship between the Conjunctions over time. 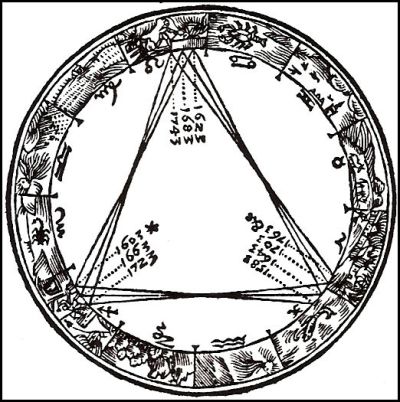 The upcoming Great Conjunction we will experience about a year from now is particularly significant. The element will change from Earth to Air and with both planets in Saturnine Aquarius. It will occur exactly on the Winter Solstice with the Dragon’s Head exalted in Gemini in the Confines of Mars, who in turn is strong in his Diurnal Domicile and looking rather menacing on the Midheaven. One underestimates Saturn at one’s peril and even more so when Jupiter is with Saturn in Saturn’s domicile. There is really no getting around the harshness here.

Looking more closely, we find Mars in his Diurnal Domicile with the Moon in the same sign. Mars and the Moon never work well together. The Moon in Aries can be rash and reactionary – supplying the emotional fuel to trigger Mars. The other malefic, Saturn is with a saturnine Jupiter in the 8th House, associated with death. The Sun and Mercury are also disposited by Saturn. Mars casts a ray to Venus. The all-important Ascendant is in Cancer which is in opposition to Capricorn.

The most fruitful way to interpret a chart such as this is to keep in mind that it heralds a mini-epoch. The first thing to examine is the change of elements from Fixed Earth to Fixed Air. We can also consider the transition as being from Venus to Saturn. There are those who would have this herald the Aquarian Age, but by my estimation, we are well into that Age already. Nevertheless, this event will add greater potency and relevance to saturnine Aquarius.

Capricorn and Aquarius oppose the lights, the Moon and the Sun respectively. Because the Sun and Moon are the elements of an eclipse, it would be a missed opportunity to examine the Annular Solar Eclipse which will occur on June 21, 2020.  It belongs to Saros cycle series 137 and occurs at the Moon’s Ascending Node, The duration will be 38 secs and the Maximum Eclipse will be seen in the region of New Dehli in Northern India I could have selected an area of extremely high elevation in Tibet but it made more sense to choose a major population and cultural centre which gives us virtually identical information.

I also have concerns about the escalating hostilities regarding Pakistan and India, particularly with respect to Kashmir. Noth nuclear powers have become increasingly bellicose and both counties – one of creation and the other of Independence are  Leo, in direct opposition to the Grand Conjunction. See also the eclipse charts for July 2020.

The following chart is for New Dehli at the point of maximum eclipse. This occurs with the Ascending Node at 00Cancer20 opposing both Jupiter and Saturn. An eclipse in Cardinal signs are relatively brief in terms of effect, but at 38 seconds and a mere six months to the Grand, Conjunction is enough in itself, but there is also the inescapable fact. of the axis marking the Solstice points. Eclipses never occur alone. There will be a  Penumbral Lunar Eclipse on 4–5 July 2020, but there will be no visibility in the areas mentioned. 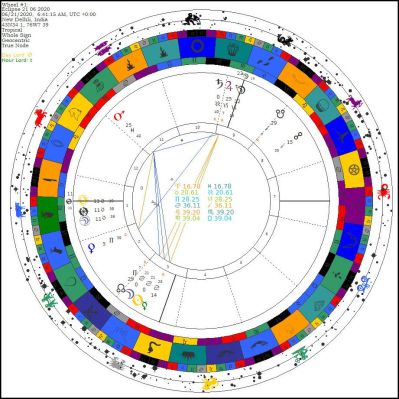 The effect of this eclipse on the Grand Conjunction will be significant, providing something of a supercharge to the event Ultimately, we are looking at cycles within cycles that go back to the beginning of time into the eternity before us.

In summary, the mini-epoch we can expect beginning with the Great Conjunction of Winter Solstice 2020 will feel more abrupt that in most cases because fixed earth is giving way to fixed air. Aquarius has the reputation of the innovative humanitarian, but we have been greatly misled by the fabrication of the Age of Aquarius and all it promises. Fixed air forges a mind that is not easily changed and technological innovation, accelerating daily, requires high ethics, intuition and a strong sense of benevolence. I recommend reading the great Hellenistic astrologer, Vettius Valens with diligence. Valens offers a great wealth of insight which very often requires careful reflection. Also required is an understanding of the context in which he expresses himself. He is discussing a sign, rather than a person. Also, it would be a mistake to assume “born under a sign” to of necessity mean the Sun sign.

“Aquarius is the celestial sign which is masculine, solid, anthropomorphic, somewhat damp, single. It is mute, quite cold, /12K/ free, upward-trending, feminizing, unchanging, base, with few offspring, the cause of troubles arising from athletic training, carrying burdens, or work in hard materials, an artisan, public. Men born under this sign are malicious, haters of their own families, incorrigible, self-willed, deceitful, tricky, concealing everything, misanthropic, godless, accusers, betrayers of reputations and the truth, envious, petty, occasionally generous (because of flow of water), uncontrollable. As a whole this sign is wet. By part it is as follows: the first parts are wet, the upper parts fiery, the lower worthless and useless. It has …stars. According to the Sphaerica the right parts of Andromeda rise in the north with Aquarius, as well as the rest of Pegasus; in the south, the southern one of the Fish, except for the head. Juno, Hercules, Vulcan, Saturn. /12P/ In the north nothing sets. In the south the rest of Centaurus and of Hydra (up to Corvus) set . This sign lies toward the west wind. In addition it faces toward the zone of Egypt and the surrounding cities, i.e. from Egypt’s southern parts up to Pselchos, Dodecaschoinos, and Sykaminos; from its western parts to the oasis of Ammon and the surrounding cities; from its eastern part to the Red Sea which touches Egypt; and from its northern parts to Sebennytos and the Heracleotic mouth of the Nile.” (“Aquarius” – Vettius Valens, Anthologies, Book I)

Horoscope from the Book of the Birth of Iskandar 1411 Aquarius the Water Bearer – Note that complexion of both saturnine signs is dark.