North and South America get the best view of the July 4-5 lunar eclipse. People in the westernmost parts of Africa and Europe will also view the event.

However, most affected will be the US is ruled by Cancer and the fact that this is a Lunar Eclipse makes it all the more relevant.

There are several other countries under the sign, such as Paraguay, Scotland, Holland, the Democratic Republic of the Congo, Croatia Djibouti, Kiribati Laos,  Madagascar, Malawi Mozambique, Rwanda, Slovenia Solomon Islands, Somalia, and South Korea, but these are not in the path of the eclipse.

Robert Zoller claimed that the de facto capital of the US is New York and NYC will end the U.S. Independence Day (July 4) with the penumbral lunar eclipse. Commencing at 11:07 p.m. local time, the Moon will begin to move into the Earth’s outer shadow. At maximum eclipse (12:29 a.m. on Sunday, July 5) Approximately one and a half-hour later after maximum, at 1:52 a.m., the event ends. The eclipse duration will be 2 hours and 45 minutes. As a lunar eclipse, the effects will be felt for the coming weeks. 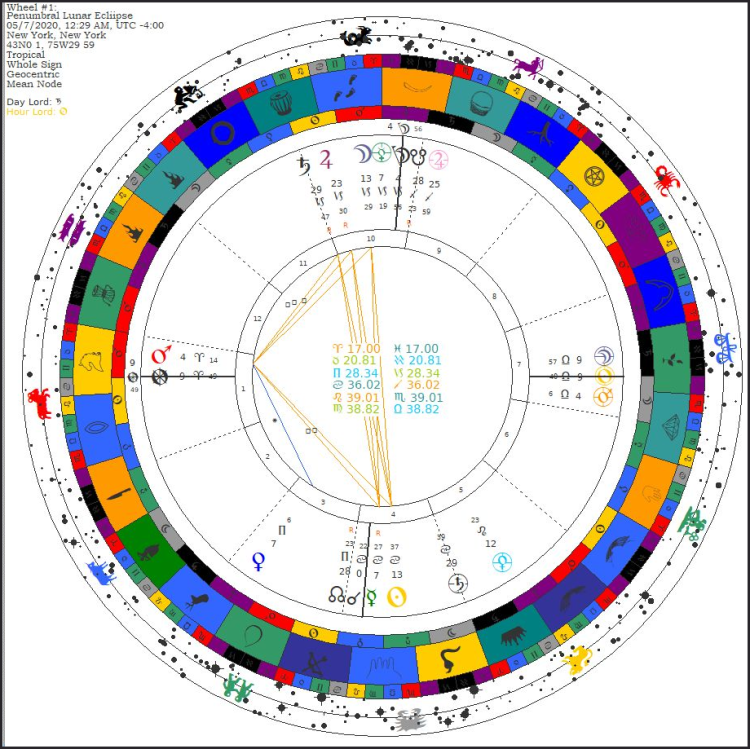 Mars is Ascending in Aries in the decanate of Mars in the nakshatra of  Ashvini (अश्विनी aśvinī). This is the first of the nakshatras aka lunar mansions. In the Hindu system, the nakshatra spreads from 0°-0′-0″ to 13°-20′, corresponding to the head of the Ram. This nakshatra is under the governance of Ketu.

The corresponding Lunar Mansion is known as the Ram’s Horns.

The eclipsed Moon in the 23rd Lunar Mansion Al Sa’d al Bula (The Lucky One of the Swallower) 12°51’22″ Capricorn to 25°42’51″ Capricorn. Al Biruni tells us that  Sa’d bula, the glutton, is marked by two stars on the left hand of Aquarius, between them is a third about to be devoured by the glutton. Picatrix adds “The twenty-third Mansion is Zaadebola, and it is for destruction and devastation.”

The Planetary Day is Saturn. The Planetary Hour is the Sun and Saturn is the Sign ruler of the Moon and the Moon is the Nocturnal Triplicity ruler of  Saturn, the Almutem. Mars is the Lord of the Eclipse.

We have watched as this Saturn and Mars domination unfolds and here we have Saturn and Jupiter making their way to the Grand Conjunction at the Winter Solstice; both are in Saturn’s domicile and retrograde. Each eclipse leading yo to and following the GC provide essential details to afford us a more complete picture of what is to come.

This is what is being eclipsed – the established order. The picture is one of a violent revolt unlikely to succeed because it lacks the elements required for sustained results. There is also solace in the fact that the Mars aspect to the eclipse and the planets in Capricorn, is separating.

Mars may be soothed by Venus. but here the sextile is undermined by the fact that Venus is mercurial Gemini. Mars and Mercury are of little help to each other except when an explosion is a goal.

Mars is in an antagonistic d relationship with both luminaries as well as Mercury Rx. Both benefics are essentially neutralized, while Mars is burning down the house.

The east coast and the midwest of the US will experience electrical storms od unusual force. Storms are to be expected in the Caribbean, particularly the Antilles, the Bahamas as well as northern areas of Columbia.  Some flooding is to be expected.

One thought on “July 4-5 Penumbral Lunar Eclipse – Burning down the house. ”