From the Cult of  Apollo to Plato’s Phaedran Charioteer to the Egyptians and Hindus the Solar Chariot drawn by seven horses  has been a central metaphor not just of the passage of the Sun, but of Cosmic harmony itself. This entire temple is layered with cosmic symbolism .

The temples is oriented on the East – West Axis overlooking the Bay of Bengal.

Among the many joys of practising traditional astrology, is the opportunity to fully explore the inner planets. When the going gets deep, the shallow resort to ‘higher octave” delusions. The formula seems to be if it’s deep, make sure it’s as far away from the Sun as possible which strikes me as perverse.

Being personal doesn’t mean it can’t also be universal. Let’s take Mercury for example. Mercury has the be the most skimmed over of all planets. This is really unfortunate because Mercury in his many manifestations has perhaps the richest set of attributes of all.

Everyone interested in astrology knows Mercury is about communication and short journeys and not much else. In fact, he is probably best known for the Mercury retrograde effect.

Let’s begin with the glyph. The Semi-Circle, Luna symbol  is Soul. The Solar circle is Spirit. They are above the Cross of Matter.

Although Mercury is usually referred to in the masculine, *he* is in fact the primal hermaphrodite that takes on the gender of it’s sign and position. However, it’s Mercury’s nature to communicate both the Solar and Lunar Self. As the Magician, he channels this energy to the world of Matter, symbolized by the Cross.

The image of Thoth (below) embodies the nature of Mercury. He has the Solar – Lunar disk above him. He is in the form of the Ibis. There has been much contention about why the Ibis was chosen as representative, but the most important issue is that it represents Spirits of the Air or intellect. No matter which form he takes, whether Mercury, Hermes or Thoth, he is a winged deity. 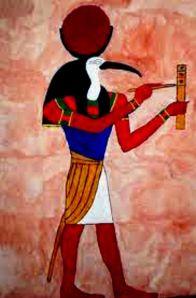 Thoth and Hermes were credited with the revelations of writing, mathematics, magic, astrology, astronomy, medicine, and  the almost completely forgotten role of Psychopomp, conductor of souls to the next world.

When we consider all of these, Hermes takes on a redemptive quality. Yet Modern astrologers have ascribed all of these qualities to the outer planets, mostly Uranus and Pluto. Now that he is virtually ignored, or written off in a sentence or two as the most boring planet,  we can see the extent of the loss.

As messenger to the two luminaries, he was held in very high regard. He is also credited with revealing the musical spell to bring Osiris back to life. In the earliest Egyptian sources he is a self created god.

There is great import in the seemingly simple sentence :

“Do You not know, Asclepius, that Egypt is an image of heaven, or, to speak more exactly, in Egypt all the operations of the powers which rule and work in heaven have been transferred to Earth below ?” (Asclepius III, 24b.)

These words of Hermes contain the essential dictum of “As Above, So below.” However the precise way that we comprehend this will depend on which model we are using to reference. For example, it is completely in keeping with Plato’s doctrine of the Forms, the idea that meterial, physical reality is not the ultimate one.

If we follow this essential teaching  through the Works of Plotinus, we have a complete system of thought that is mystical. A key image in the Enneads is the fountain of light, from which all originate and ultimately return.

In the magical tradition of Hermes Trismegigstus, Pico dell Mirandola uses the image of Hermes wedding Earth to Heaven.

Mercury is a winged god, renowned for his speed. Sometimes refered to as Quicksilver, the protean shape shifter resembles the mind itself from the point of view of, say, Buddhism. Mercury is also the Triskster. I’m particularly interested in how Hermes was transmitted to Iranian and Arabian culture and the Abassid astrologers in particular

The early Abbāsid court astrologer Māšā allāh (fl . 762–ca 815) has been called the Prince of Astrology by Robert Zoller. He was “an associate of Umar ibn al-Farruxān aṭ -Ṭabarī, cites Hermes as an authority in his own Arabic works. He may well have known works of Hermes in the Middle Persian original; being a learned Iranian Jew, Māšā allāh could have had access toAramaic and Persian sources as well as Arabic’ (Pingee, Masa’ allah 1973. pp. 159 – 62). Several other Arabian astrologers including Al Biruni are discussed in Kevin van Bladel’s The Arabic Hermes: From Pagan Sage to Prophet of Science.

It’s fair to say that Masa’Allah was the most erudite of scholars at the Abbasid court as well as the finest astrologer. How he received Hermes therefore has resonance in European and Arabian astrology, particularly prior to the Renaissance. Their sources were Middle Iranian and not Arabian in origin. The Persians had taken and translated Hermes into their own language, and as is the case in all cross cultural receptions, Persian elements were attached. However, as can be seen by the photo of the “Arabian Hermes” he has all the same attributes, albeit in what contemporary Greeks might have thought an exotic fashion.

First, we see Mercury is winged, holding the Solar and Lunar elements. The downward triangle remains the symbol of descent into matter to this day. There is however nothing to suggest that he is merely ‘Earth bound.” The two heads certainly have a more Persian design, but it’s quite easy to see the reference to the caduceus, with the two ‘serpent’ heads (perhaps birds in this case.)

There is still plenty of room for cultural interpretation. The role of psychopomp will of course differ in understanding depending on belief in the afterlife. For one it might mean ascension and to another successfully crossing the River Styx. However, the role of spirit guide doesn’t have to change. In the words C.G. Jung:

“From the earliest times, Hermes was the mystagogue and psycho pomp of the alchemists, their friend and counselor, who leads them to the goal of their work. He is “like a teacher mediating between the stone and the disciple.” To others the friend appears in the shape of Christ or Khidr or a visible or invisible guru, or some other personal guide or leader figure.” Archetypes and the Collective Unconscious – CW 9i (1934–1954) (1981 2nd ed. Collected Works Vol.9 Part 1)

Hermes is much more than Magician and Psycopomp, but I believe these are the most ignored attributes in our time. Finally, we have the beautiful Alchemical illumination from the Buch der Heiligen Dreifaltigkeit on the left.

This has remained mysterious, although of course many scholars have had their theories. The image is very similar to the previous Arabian illustration, certainly not in style but in substance. Here the Mercurial figure is female. As mentioned, Mercury can be both genders, but is rarely portrayed as a woman. The caduceus- like form is there, with the Sun and Moon, but it’s reversed. She forms an ascending triangle. This image gives much to contemplate regarding the feminine attributes of Hermes.

I have often referred to the works of Botticelli in relation to Neo Platonism and The Hermetic Philosophy, particularly The Primeva, The Three Graces and Birth of Venus – These masterpieces were painted under the tutelage of Marsilio Ficino