Ravi Shankar was arguably the best known and most revered player of the sitar in the world. He passed away at the age of 92 on 11 December 2012 at 4:30pm PST.  Shankar had been admitted to Scripps Memorial Hospital in La Jolla, San Diego, California after complaining of breathing difficulties. According to The Ravi Shankar Foundation, Shankar had suffered from upper-respiratory and heart issues over the past year and underwent heart-valve replacement surgery on 6 December 2012.

Shankar has been refered to as the father of world music. I think this came as a great surprise to him. He couldn’t understand why pop musicians would want to play the sitar. Eventually he went on to play with the likes of Yehudi Menuhin. At a concert in the late 1960s, he was horrified that members of the audience were kissing. He was more than a bit irritated that western audiences failed to understand the sacred nature of his music, and one has to assume that kissing during a perfomance was like a form of blasphemy to him.

I have what is allegedly accurate natal information provided by Kundli Sangraha Tendulkar and have cast two natal charts for Mr. Shankar using Regiomontanus and Whole Sign houses, the latter being somewhat closer to the Indian system.

In loving memory of Ravi Shankar

This is the video chosen by his daughter, Anoushka Shakar, to remember her father and thank all those who sent their blessings and condolences.  This piece was played inside the Kremlin. In concert are Ravi Shankar’s Indian Ensemble, the Russian Folk Ensemble, the Government Chorus of Ministry of Culture of USSR, and the chamber orchestra of the Moscow Philharmonic. The photos are from the Hubble telescope 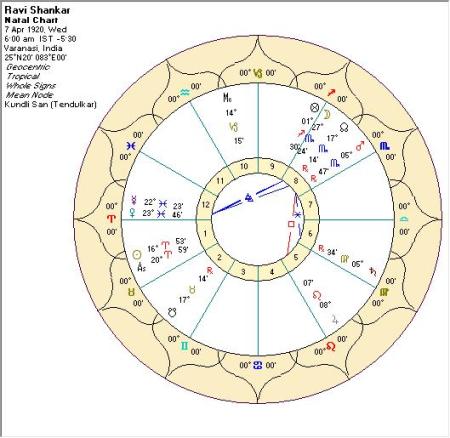 I will not be going into an in depth reading of these charts at this time. For now, I want to be certain this is in fact the correct natal information. Although I have no reason to doubt the source, I do find the horoscopes to be problematic for a number of reasons. The  Whole Sign chart is much less s0. I will restrict comments to this house system for the time being. Here are some preliminary thoughts

First of all, the Moon is Void of Course. This is not a particularly rare event, but she is also in her Fall. The Sun is however in his Exaltation and in the first house.  Mars disposits both Sun and Ascendant. In fact, Mars is overwhelming strong in this chart. He is chart almutem, the almutem of profession and the killing planet.

Venus is exxalted in Pisces in tight conjunction with Mercury also in Pisces and in his fall. They are in the twelfth house  The chart is of the day and hour of Mercury.

When we look at the fifth house, we find Jupiter in Leo. The fifth house is the topos of children, theatre and music among other things. This house in disposited by the exalted Sun and home to Jupiter in Solar Leo. We can see how all these elements can work together.

Perhaps the most glaring difference between the two house systems is that Regiomonatus puts Saturn in the fifth, which seems untenable to me.